Let’s flash back to January 18, 2009 when these pictures were taken. I had just finished getting my degree at OSU the previous month and it was time to celebrate.

I’m torn between thinking “Holy cow, that was just 3 years ago” and “Holy cow, it’s already been 3 years? Wtf have I been doing??” Yikes.

The previous summer, I had been visiting home and in one of my particularly quirky moods, I became obsessed with a 3D duck cake pan at a yard sale and convinced my mom to not only buy it, but agree to make a cake for me for a graduation party we weren’t even planning yet, lol. I didn’t let her forget either and she obviously followed through.

Yes, I did say I graduated college…with a real degree…with multiple minor specializations…at the top of my class. And yes, I chose to have a duck cake with lots of little rubber duckies. If that blows your mind, wait until you see me playing with glow sticks and dancing the night away with toddlers. ;)

Anyway…. as with every party or cake post I do, I have tons of pictures, so I put most of them into a collage. Mouse over them and they’ll pop up a slightly larger version or click on through to see the full pictures. Some of them come with stories, though, and they’ll be on down.

Oh, and any of you who attended the party and don’t quite recall some of the details that are now showing in your pictures, it’s because I’ve replaced all your “adult beverages” with baby bottles. PG-13, y’all. ;)

The top middle pictures is how glow stick balls look put together, but for whatever reason, they ended up as hats to spin on our heads, too.

You know it’s a good party when only a few people know the picture is being taken, but everyone in it is smiling.

That second one is my “come hither, you’re dancing with me, too” move.

I really don’t know if I sat down at all that night. I think I might’ve to eat. Maybe. Most of it was spent right out there on the floor with a bunch of kids, though, and I wouldn’t have had it any other way. I also drove many of them home at the end of the night, too….my home…and we all crashed on couches and floors.

Some of us obviously weren’t done partying, even when bodies said it was time to sleep.

But never fear, the next day brought more duck cake fun. And in case I didn’t say it enough then or you don’t get the impression here, thanks for the fabulous party. <3

Food trucks, but not – Trucks that look like their foods

I actually had a hard time finding information on some of these because any searches that continued both “food” and “truck” automatically brought up a billion different food trucks. I love ‘em, too, but their popularity over the last few years especially is getting a little ridiculous.

Mostly because there’s no way I can try out all the food trucks I want, pfft. :P

Anyway, to the trucks!

Westport Flea Market Bar & Grill – This one is actually one of my favorites. If it weren’t parked outside the sign saying it’s for a bar and grill restaurant, too, I might be a little confused but regardless, I like that the entire vehicle has been transformed into a burger and all its fixig’s.

Goldfish – The snack that smiles back

How to make glow-in-the-dark sushi

Well I guess it’d be rather easy to ask “Do I have any fish stuck in my teeth?” and actually get a real answer back in the dark restaurant or bar.

I’m not the only one gets asked that, right? And 99% of the time it seems to be in poorly lit areas where there is no way I can actually tell if there’s food stuck in their teeth…

But yes….fish….that glows in the dark. I’m sure that’d be a hit at our next Halloween party. It’s probably a bad thing that I’m picturing floating them in a fish tank…or worse yet, playing those games where you let kids feel the gross foods in bowls with their eyes closed (like peeled grapes as eyeballs….gummy worms for worms….dead fish as…hmmm).

If you’re in California, you’re out of luck, but anywhere else is fair game to order these little glowing fish and make your own. 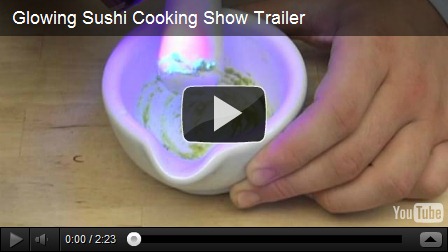 Too bad I couldn’t get by with just using some neon tetras from the local fish shop instead. :P