“People food” that’s safe for your dog, too! 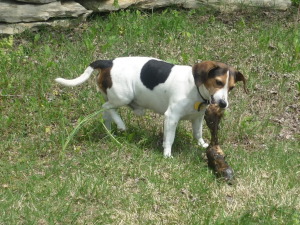 For a full, in-depth tutorial and information about how I make my own dog food from scratch, check out my old post on homemade dog food.

In addition to those basics, here are some more healthy foods that are great for your dog. Just remember that you should be careful when drastically changing your beloved pet’s diet and it never hurts to consult with your veterinarian first, especially if your dog has health issues at all.

Do you know of any other foods that are safe and well-loved by dogs?

I have been asked several times how I make my own dog treats, in addition to dog food. I’ve been working on compiling a list of great recipes, but this one is getting its own post because it caught me off-guard.

It was featured on All Recipes front page even, but when I clicked through to watch the video, I was surprised by the main ingredient: liver baby food.

I’ve never even seen liver baby food, so of course the first thing I did then was to google that, too. The vast majority of what popped up was Asian baby food jars and this lone Gerber image from what looks like the 50s maybe:

I don’t think they actually sell it any more, but the video clearly shows it being used at around the :40 second mark. Ewww! That looks even worse than most other baby foods!

If you really want to make this particular dog treat recipe, then just puree some chicken or beef livers and you’re good to go. Please don’t torture your baby with it, though. :P