How to puree pumpkin – Throw it across the yard!

NaBloPoMo – Something you miss

No Mom, we didn’t break any windows, as evidence by your door still being intact and none of us getting into big trouble when you got home that day. :P

In fact, I believe that particular sugar pumpkin ended up in the pool actually….and this was just a funky angle of picture, making it look like it’s going the other direction.

There are a lot of things I miss, but this is a perfect example of something I wish I’d spent more time doing and still had access to doing now. Who else could I spend so much time throwing pumpkins with?

A few years ago, I discovered the wonders of pumpkin puree, so last year, instead of just grabbing a few pumpkins for jack-o-lanterns, my mom bought, oh, about 12 pumpkins for me. Awesome, no?

Unfortunately, opening up lots of pumpkins with a butcher knife isn’t quite as easy or fast as you might think. The year before, I did drop a couple pumpkins off our porch to get them cracked a bit, but that just wasn’t going to cut it last year.

Instead, I gathered the girls, mostly still in their pj’s, and we threw them all over the back patio area. Pumpkin seeds and guts were everywhere, including in the pool.

If you can’t tell, it was an absolute blast. 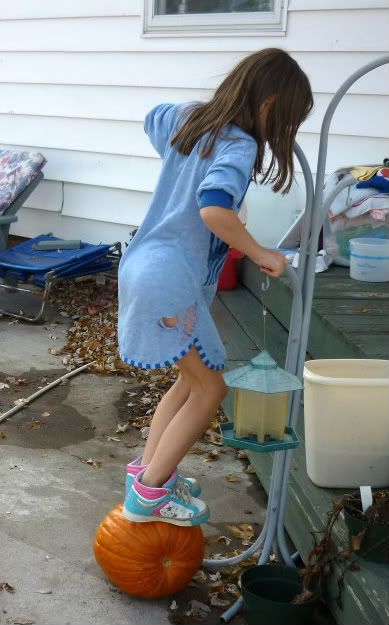 Even Buddy enjoyed it, stealing the pumpkin stems, chewing on them like bones, and attempting to bury them after playing fetch for a while.

After all the pumpkins were sufficiently broken, we separated all the seeds into a bowl and I spent the afternoon washing, baking, pureeing, and freezing pumpkin before roasting up all the seeds.

(Shockingly enough, that is *not* all the pictures I took. To see more mad pumpkin throwing skills, clicky here for the QC photo album.)