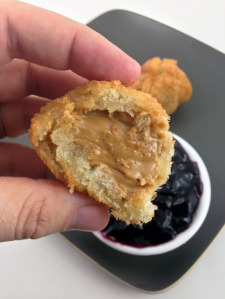 This is exactly something I would do. Everything is better when deep fried. Fortunately for me, DudeFoods already found the problem areas and how to implement this correctly, so that means even less work for me.

I actually prefer the idea of having the jelly as a dipping sauce instead of mixed directly into the fried bread balls. This means controlling exactly how much sweetness gets added each time and there’s the added bonus of choosing some nutty, fried goodness without any jelly at all.

And then there’s the added bonus for someone who is as indecisive as I am and who loves using different sauces: I could easily have 3 different jams or jellies out with these and then pick and choose which to dip in!

Hershey really knew what he was doing when he created the Reese’s cup back in 1928 (Thanks Wikipedia!)
You really can’t go wrong with combining peanut butter and chocolate. Well, I guess you kind of can if you’re the type of person who hates chocolate (shame on you!) or you have a fatal peanut allergy….
But outside of that, chocolate and peanut butter just work. This weird brownie cookie, peanut butter stuffed creation was no exception to the rule either.

Unfortunately, I don’t have a recipe for these, though.

They were inspired by some long-forgotten chocolate cookie I found online, but during a heated moment of peanut butter craving, I tried stuffing them with a peanut butter and powdered sugar filling.

I quickly realized that trying to create a pocket in the somewhat-dry cookie dough and then filling it with peanut butter was rather tedious….not to mention kind of messy and ugly.

And because I wanted cookies *now*, I moved to creating a base and “top” out of cookie dough and dropping dollops of peanut butter in the middle instead.

The result wasn’t really any prettier, but it did seem a lot faster and easier.

And the result was tasty regardless. They look drier in the pictures than they really were. The oil from the peanut butter soaked into the surrounding chocolatey goodness, leaving an almost brownie-like coating around the peanut butter center, but with crunchy edges.

They were the perfect blend of brownie/cookie with ooey gooey peanut butter in the middle. If you’re the type who likes the chewy edges on brownies, but a soft middle, these are wondermous. It’s a shame I didn’t record the ingredients I used at the time, but oh well.
... Older Posts