Let’s flash back to January 18, 2009 when these pictures were taken. I had just finished getting my degree at OSU the previous month and it was time to celebrate.

I’m torn between thinking “Holy cow, that was just 3 years ago” and “Holy cow, it’s already been 3 years? Wtf have I been doing??” Yikes.

The previous summer, I had been visiting home and in one of my particularly quirky moods, I became obsessed with a 3D duck cake pan at a yard sale and convinced my mom to not only buy it, but agree to make a cake for me for a graduation party we weren’t even planning yet, lol. I didn’t let her forget either and she obviously followed through.

Yes, I did say I graduated college…with a real degree…with multiple minor specializations…at the top of my class. And yes, I chose to have a duck cake with lots of little rubber duckies. If that blows your mind, wait until you see me playing with glow sticks and dancing the night away with toddlers. ;)

Anyway…. as with every party or cake post I do, I have tons of pictures, so I put most of them into a collage. Mouse over them and they’ll pop up a slightly larger version or click on through to see the full pictures. Some of them come with stories, though, and they’ll be on down.

Oh, and any of you who attended the party and don’t quite recall some of the details that are now showing in your pictures, it’s because I’ve replaced all your “adult beverages” with baby bottles. PG-13, y’all. ;)

The top middle pictures is how glow stick balls look put together, but for whatever reason, they ended up as hats to spin on our heads, too.

You know it’s a good party when only a few people know the picture is being taken, but everyone in it is smiling. That second one is my “come hither, you’re dancing with me, too” move.

I really don’t know if I sat down at all that night. I think I might’ve to eat. Maybe. Most of it was spent right out there on the floor with a bunch of kids, though, and I wouldn’t have had it any other way. I also drove many of them home at the end of the night, too….my home…and we all crashed on couches and floors. Some of us obviously weren’t done partying, even when bodies said it was time to sleep.

But never fear, the next day brought more duck cake fun. And in case I didn’t say it enough then or you don’t get the impression here, thanks for the fabulous party. <3

Silly, goofy, crazy….quirky, if you will. I know they’re overused, cliché descriptors, but hey, that’s me.

I started the original Quirky Jessi site several years ago and then eventually realized there was so much cooking-related stuff I wanted to post, that I needed a whole cooking site.

Playing with food makes me giggle and yes, yes, I realize that many mothers out there spend years teaching their kids to stop it. But why? It’s fun! And if you’re not having fun, then really, what’s the point?

As for stuff about me (‘cause oh right, this is an “about me” page, oops), I don’t know what people would want to know. I’m a youngin’, but the bunny ears make me look younger than I really am. I have my Bachelor’s in Journalism, with a few unrelated minors, including the safe one in business as a backup for when I became a starving writer/artist. 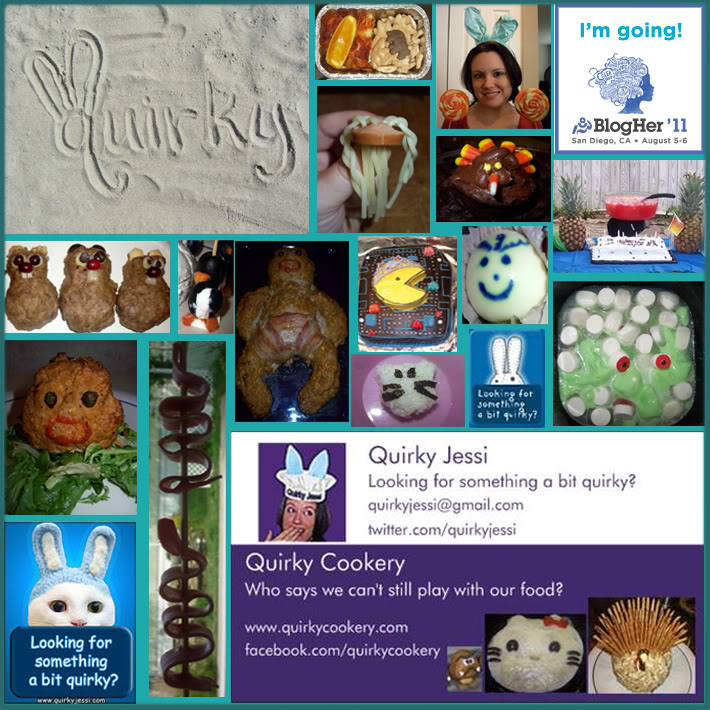 Oh right, that’s where I am now, hehe. Maybe I should check out a real job sometime? Instead, I spend much of my time goofing off in the kitchen and online….usually both actually, considering I keep my laptop on the kitchen table.  Yes, I’m serious. Mostly.

What else would you want to know? I’m from the U.S….mostly the midwest….Illinois, Missouri, Kentucky, Ohio, etc. I’m currently in Vancouver, Canada, so you’ll see both my love of the city….and how much I like to make fun of some of their strange eating habits.

Then again, I have my fair share of them, too.

Then there’s my little sister, 15, who I got permission to show her picture from, so now there’ll be no more black bars across her face.

And occasionally you’ll see me talk about my mom as inspiration or the creator of all those awesome birthday cakes.

Can I be done now? I really don’t like talking about myself. I want to talk about the food. Wanna come play?

While I consider myself a gamer and have made my own gaming related foods in the past, Settlers of Catan is foreign territory for me. Had the reference not been listed specifically in their post, I probably would’ve just seen this as a really cool breakfast bar setup.
Which it is. Game or no game, check out that setup!

These were specifically built for brunch and an afternoon of gaming. Even the food choices involved are set to last for several hours set out (ie – hard boiled eggs instead scrambled eggs). The waffles are just for display purposes and Kitchen Overload recommends having the waffle iron left out for fresh waffle-making purposes….and possibly a skillet and butter for fresh scrambled eggs instead of the hard boiled option.

For me, though, I just fell in love with those bowls, no matter how long the food is intended to be left out!  I started imagining all the different food combinations I could put together into a buffet style spread for parties.

Or heck, when there were 6 of us in the house and the kids brought over friends, that was the food equivalent of a party every other day, ha! So it could’ve been fun to have Hawaiian haystack toppings or taco night spreads in dishes like these. Ooo, or for pizza nights where I’d let everybody build their own topping combinations. I’d definitely want the small ones for something like that, though (like shown in the one with jam/butter/cheese). And a sundae bar with all the fixins! And…. ok, you get the idea. My thoughts on them are endless.

The best part is, they’re super cheap. Instead of spending 12 bucks a pop on real dishes, they used weight boats that you’d find in a lab…..$16.95 for 100 of them! Yes, a hundred of them, so for an arrangement like the Catan board, you could have 5 different spreads (19 hexes per board) and just toss them out after each time without breaking the bank. That sure beats washing them, too.

Click over to KO to see the breakdown of the sizes used/recommended (the medium one actually holds 2 full cups of goodies, so beware!).

They’re going to be flimsy, but I think stacking them side-by-side might give them a bit more stability. So long as you’re careful, I don’t think it’d be a big deal anyway. What’s the worse that can happen? A few grapes spill out on the table? Or some salsa gets a little messy? Oh noes….it’s the end of the world!