I have been around the interwebs for my fair share of “pi days”* and have seen a lot of awesome pies created for the day. I’ve even made my own pies on that day, because that’s what you’re supposed to do, right?

But this one takes the cake (er, pie?) for the best pi-related one. It goes above and beyond just putting the pi numbers on top and instead, fills the center with pie shaped apple slices, too. How fun would that be to slice into after already being impressed that there are numbers on top and expecting a regular pie inside?

From what I hear, A Periodic Table blogger Shannon is pretty darn good cook, too, and she’s got a lot of tips for how to make your own pie taste amazing, so I’m pretty sure this not only looks awesome, but would taste awesome, too. Usually when I see creations like this, I want to make my own and it inspires me to do something similar or related somehow, so it’s not an exact copy. I have no idea how I could possibly improve this one, though, so I’m just going to leave it to her. <3

Shockingly enough, this was on a Southwest flight where the attendants made more ‘gourmet’ style food out of airplane snacks. I’m not a big fan of Southwest given several past experiences and I think this has way more to do with some quirky flight attendants wanting to experiment than it does with the company itself….but hey, at least they allowed something like this, so they get a few indirect points from me anyway. I’ll try to ignore that it took place while people were flying to SXSW, which is known for having a lot of bloggers who might be tempted to blog something like this… ;)
Some of the recipes that chosen passengers were taught to make were “Key Lime Cookie Dough Sort Of” (above) made of cookies, creamer, and lime and this chocolate “mousse” (below) using hot chocolate mix and creamer, which does look like a nice dip for pretzels.

Unfortunately, you don’t usually get more than one snack offered during a flight, so making these snacks on a regular flight is unlikely. If you ever get access to multiple snacks, though, then make yourself a fun treat! I’m sure you could create more if you buy those ‘snack pack’ boxes they offer, but then you might as well bring your own snacks instead of paying for them anyway.

Also, I actually didn’t know you could get hot chocolate on a plane. I’ve only ever been offered sodas, alcohol, and coffee really. Hot chocolate would be quite delicious while flying, I think. Do any other airlines offer it? That might be enough to get me to try Southwest again, hehe. 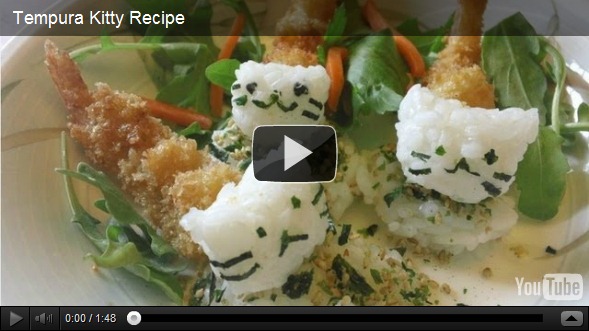 I’m sure there’s a pun in here about them being tem-purr-a….

The site I originally saw this on called them “sweet little tempura kitties,” but I actually find them a little creepy.

After all, why are we putting cat heads on shrimp? Is there something here that I’m missing? I love the rice cats and have made my own even, but to put them on shrimp? I’m not sure even I would do that.

Well I might *now,* but I wouldn’t have before….