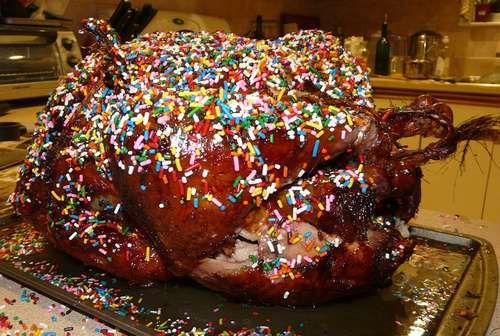 That, ladies and gentlemen, is a turkey brined in Dunkin Donuts coolattas, filled with munchkin doughnut holes, and covered with a syrup and sprinkles.

And what do you serve with a strangely sweet turducken? Mashed hashbrowns and the munchkin stuffing covered in a special coffee gravy obviously. You knew it couldn’t be a Dunkin’ Donut turducken without the coffee being thrown in there somewhere, too, right?

As usual, someone was nice (proud?) enough to share all the pictures, ingredients, and reviews of the whole process so we can indulge vicariously through their efforts. Do you think you would eat this?