Last month I signed up for the Crazy Cooking Challenge and immediately kept an eye out for chicken noodle soup recipes. I knew I wanted something “different,” just for the sheer sake of this being your not-so-average cooking site, but really, there’s only so much you can twist and tweak a classic dish like chicken noodle soup. The requirements said it had to be soup…had to have noodles…and had to have chicken. No exceptions, so there would be no converting it into a hot pocket or casserole or anything “different.”

Or so I thought anyway.

That’s when I ran across Lynn’s Kitchen Adventures Asian version. It fits all the requirements, but isn’t exactly the standard soup you think of either. I probably wouldn’t have given it a try had it not seemed so perfect for this challenge either, so I’m glad it worked out this way. Turns out, it was delicious!

I must say, I really had my doubts about it, mostly because the ingredients are so simple and it doesn’t sit on the stove, simmering for a long period of time, which is a key step for soups in my mind. But anyway, let’s get to the food, huh?

Normally I would have homemade chicken stock in the freezer, but I’ve been looking for an excuse to use up the last of these little Knorr stock packs I received at BlogHer this year. They’re actually a lot better than I thought they would be and don’t carry the overly salted taste that most premade broths do.

And would you look at that?? I thought it’d be liquidy or maybe a dry block like bouillon cubes, but instead, they’re gel packs of sorts. Almost like strange jello shots….of chicken stock. Weird, but easily dissolved and mixed.

I think I may’ve mentioned that my can opener broke? Well I haven’t replaced it yet. Shhh. :P

For the slaw, I just finely sliced part of a cabbage and carrot that was already in the fridge and on their last legs. The cabbage in the final product wasn’t really even noticeable…it blended in entirely. It’s great for the bumping up the nutrition, but if you don’t have any on hand, it’s not going to make or break this recipe. The carrot added some nice color and texture, though. 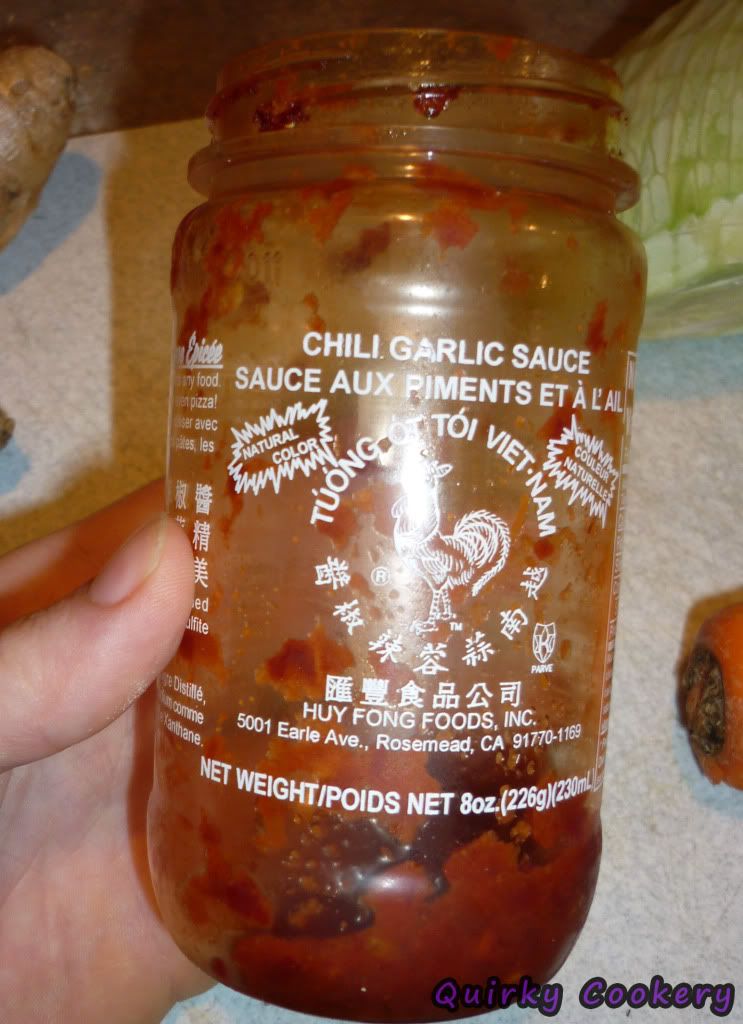 My “red sauce” of choice was chili garlic sauce that I’m savoring the bottom of the jar of. I love this stuff so much. I added some both directly to the soup and more to mine after serving to give it some extra kick.

If you’ve never cooked with rice noodles before, they’re quite amazing. They’re really rough and crumbly out of the package…pieces will fly everywhere, even if you’re careful. Add them to water for a few minutes, though, and they become really soft and bouncy. Yes, bouncy, as in, if you drain off the water and toss them on the table, you’ll see them bounce. Go ahead, do it!

But that’s not relevant to the recipe, so moving on….
Put it all together and you get something like this:

Alright, so really, it doesn’t *look* like the most appetizing dish. It’s this sickly gray color that even with some photo editing, doesn’t really look much better.

But it tastes good and that’s what really matters. Be happy I spared you the grosser series of prep pictures that were more like this picture. The shadows actually make it look better.

Ew! But it smelled delicious and I was starving so at that point, I obviously carried on. Tossing on more color really helped, so I’m happy I had green onions.

Overall impression? It was better than I expected. It was really easy and fast to make, which made it even better. A little lemon or lime juice could really go a long way in kicking it up a notch in the flavor department, too.

Oh, and I had never used coconut milk before because well, I really dislike coconut, remember? When the can was opened and the smell hit me, I started having even more doubts, but it added a creaminess that straight broth couldn’t…and it didn’t actually *taste* like coconut, so once the smell died down, I was happy with the results, hehe. I added more liquid to my bowl than what’s showing in the pictures and oh my god, I was so stuffed by the end. I had no idea it would be so filling.

For the original recipe, check out Lynn’s Kitchen Adventures. She has a version that doesn’t use the coconut milk, too, which looks more like this:

My version of the recipe ended up being for a smaller batch. Take note I didn’t just cut the original in half, and actually used almost the full amount of some of the ingredients anyway.

Remember to check out others at the Crazy Cooking Challenge.

Anything I’d like? Uh, yeah, how about an adorable vegetable peeler that when posed correctly, looks like the sweetest little lop-eared bunny? Yes please!

When I went to BlogHer this year, I also had the opportunity to meet up with some friends that weren’t connected to the conference. In fact, ones that didn’t even know I had any websites, much less silly food-related ones. You see, I’m their guild and raid leader in that lovely game World of Warcraft so they know me as the slightly harder core chick who is yelling at them to get out of stuff on the ground and to kill harder.

As you can imagine, it made for some interesting stories right off the bat about why I was in San Diego and why I was, uh, wearing bunny ears. There went my street cred.  :P

Anyway, so this guy had some tricks of his own up his sleeve. Given he had no idea my fun food obsessions, it was awesome that he had pre-picked the quirky Urban Mo’s Bar and Grill for the brunch buffet. (Click the link for cool video and description, but it’s not completely PG in alcoholic and GLBT references, so beware.)

Afterwards, we headed to a nearby novelty shop that carried a ton of those weird products I sometimes post about. It was like Quirky Cookery in store-form. And again, he had no idea in advance that I was over-the-top into this sort of stuff, lol.

When we ran across this bunny peeler, I started to take a picture because I thought it was perfect for the whole bunny theme thing I had going on that weekend, but he insisted on buying it instead. With all the craziness of the rest of the weekend, though, I didn’t think about it again until I got home and wanted to take pictures of it.

Then? Oh my god! I hadn’t really looked at it closely, but twisting the tail is what causes the bunny ears to move so you can use either the peeler or the knife separately, and then twist them back inside to cover the blades safely.

Adorable! Even the packaging was adorable. Who knew the plastic covering would be cute even? Ha.

It’s that time of year again. The time of year where I join a whole bunch of other people in writing/posting my butt off. While some of the crew are writing full novels in 30 days, the blogger variety is making sure they post every day for National Blog Posting Month.

Some years I’ve gone with a theme, like in 2008 when I did a whole month of “quirky art” on the QJ site, and others, not so much, like last year here where I just shifted my focus to making sure I showed you a whole bunch of weird food-related stuff.

This year? A variation on this:

No, I will not be drawing. :p It’ll all be food-related, whether mine or someone else’s, and will be some interpretation of each thing on the list.

Quirky Jessi and some guy wearing a sun costume at BlogHer for the Jimmy Dean (mmm, sausage) No Kid Hungry Pledge. His sheepish grin is because he was a little surprised to be standing next to someone else dressed up…and not being paid for it, ha. And yes, my ears do indeed match my shirt. What of it?