A few weeks ago, I tried the Cracker Barrel fried chicken and well, I may have just fallen in love a tiny bit. For a chain restaurant, that may be a first even, but I really enjoyed the crispy coating and it seemed like the perfect fried chicken to replicate for this challenge.

When it came time to do so, we had company and again, I thought, “hey, this lines up pretty nicely,” especially considering one of the kids only eats chicken. “Perfect.” And the recipe I found that claimed to be a copycat of it? Looked great!

I decided last minute to try to bake it instead of fry it, though, and it was a HORRIBLE mess. Sure, it tasted okay, but it looked horrible. Parts of it were still powdery and most of the coating stuck to the pan, despite taking precautions.

In my book, definitely a failure….so much so that I didn’t even consider taking a picture until I was clearing the table and it was mostly gone already. And then I only took a picture to show the mess, ha.

I woke up a few mornings later, though, and decided that before I even scrounged around for breakfast, I’d toss another few strips of chicken into a milk bath to soak. I didn’t bother measuring out seasonings this time. I didn’t even use half of them. It was a spur of the moment thing and I figured I had a 50/50 shot of convincing myself to even cook it later that day. Maybe I’d say ‘screw it’ and microwave it for the dog instead.

But by lunch time, I did want to fry them. I really wanted to see if it was the difference between baking and frying that made the recipe work. And turns out, it was.

I started arranging the pieces on a lovely white plate, as all food bloggers are supposed to, and at some point midway through, I asked my sister “What am I doing?! That’s not how I do this.”

At which point, I headed for the smiley face sauce:

And the taste? Soooo much better than it was when I baked it. This was definitely a case where the batter wasn’t going to hold well without being tossed into super hot oil so that it’d hold in a single piece around the chicken….without actually sticking to the chicken at all.

See how it’s not really touching around most of the chicken?

Anyway, this was sooo much better, both in presentation and taste departments. The double-dipping in the batter was worth the little bit of extra time and for once, this is a recipe I’ll likely repeat.

Speaking of, here’s the recipe and the linky at the bottom for the Cooking Challenge.

The directions can be found here: http://www.epicurious.com/recipes/food/views/Double-Dipped-Buttermilk-Fried-Chicken-358138  I didn’t follow half of them, though. I did let it set for a few hours. I did fry it. And that’s about it. Cook it like normal chicken….nothing special.

If you don’t see it, that’s probably a good thing…. 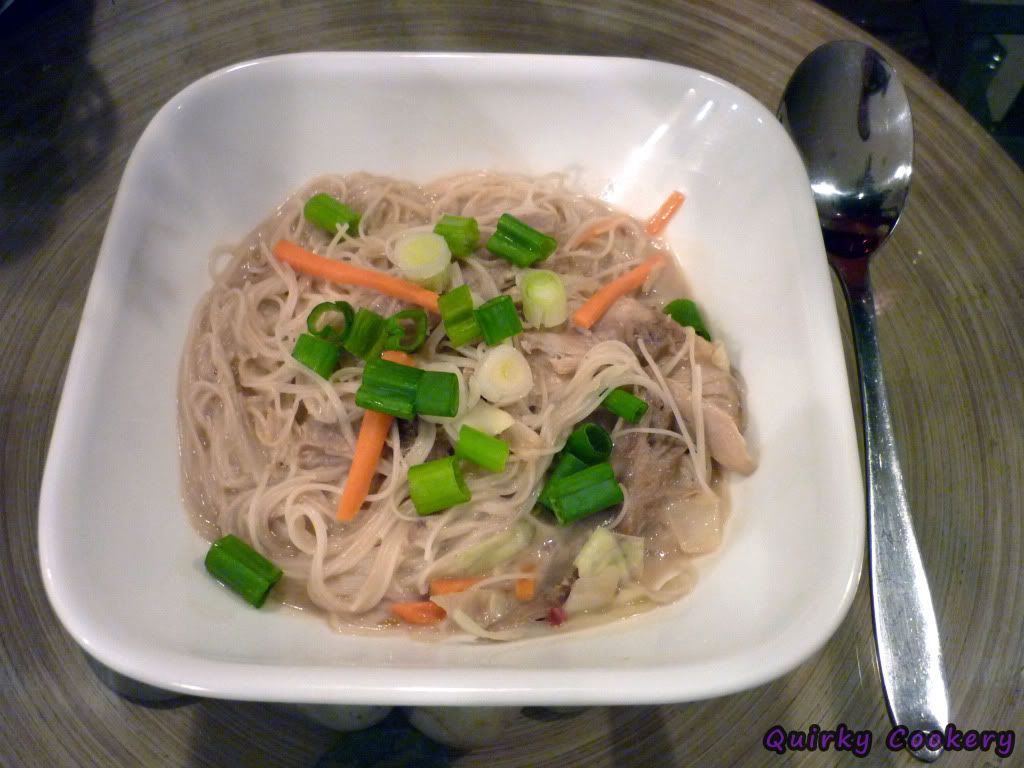 Last month I signed up for the Crazy Cooking Challenge and immediately kept an eye out for chicken noodle soup recipes. I knew I wanted something “different,” just for the sheer sake of this being your not-so-average cooking site, but really, there’s only so much you can twist and tweak a classic dish like chicken noodle soup. The requirements said it had to be soup…had to have noodles…and had to have chicken. No exceptions, so there would be no converting it into a hot pocket or casserole or anything “different.”

Or so I thought anyway.

That’s when I ran across Lynn’s Kitchen Adventures Asian version. It fits all the requirements, but isn’t exactly the standard soup you think of either. I probably wouldn’t have given it a try had it not seemed so perfect for this challenge either, so I’m glad it worked out this way. Turns out, it was delicious!

I must say, I really had my doubts about it, mostly because the ingredients are so simple and it doesn’t sit on the stove, simmering for a long period of time, which is a key step for soups in my mind. But anyway, let’s get to the food, huh? 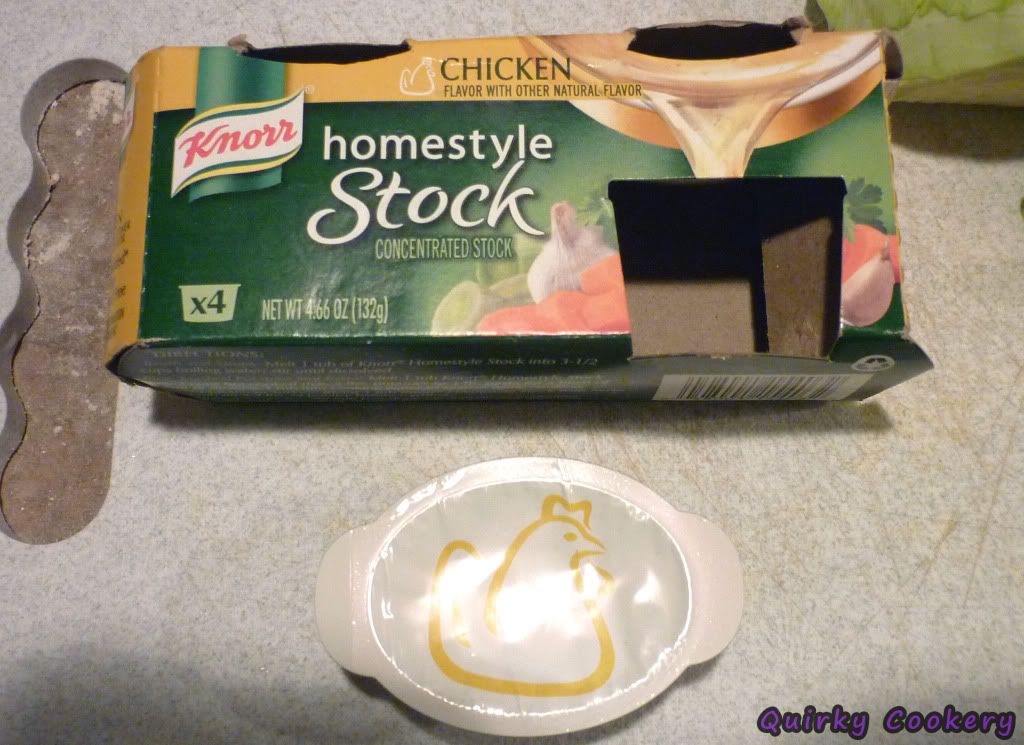 Normally I would have homemade chicken stock in the freezer, but I’ve been looking for an excuse to use up the last of these little Knorr stock packs I received at BlogHer this year. They’re actually a lot better than I thought they would be and don’t carry the overly salted taste that most premade broths do.

And would you look at that?? I thought it’d be liquidy or maybe a dry block like bouillon cubes, but instead, they’re gel packs of sorts. Almost like strange jello shots….of chicken stock. Weird, but easily dissolved and mixed.

I think I may’ve mentioned that my can opener broke? Well I haven’t replaced it yet. Shhh. :P

For the slaw, I just finely sliced part of a cabbage and carrot that was already in the fridge and on their last legs. The cabbage in the final product wasn’t really even noticeable…it blended in entirely. It’s great for the bumping up the nutrition, but if you don’t have any on hand, it’s not going to make or break this recipe. The carrot added some nice color and texture, though. 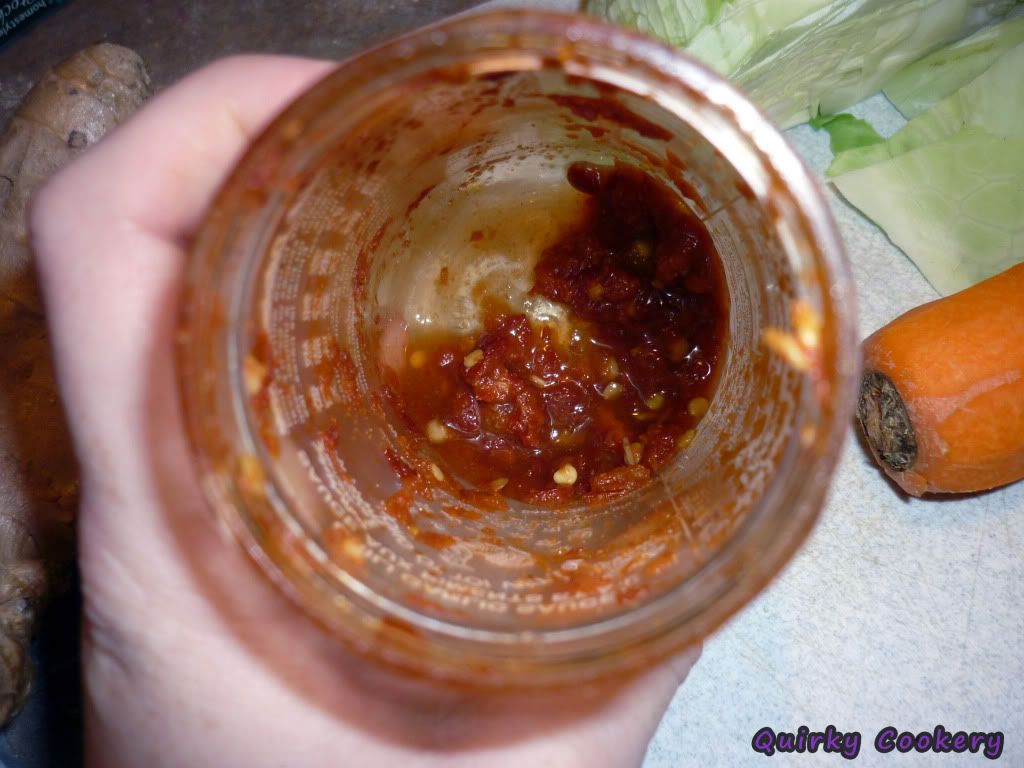 My “red sauce” of choice was chili garlic sauce that I’m savoring the bottom of the jar of. I love this stuff so much. I added some both directly to the soup and more to mine after serving to give it some extra kick.

If you’ve never cooked with rice noodles before, they’re quite amazing. They’re really rough and crumbly out of the package…pieces will fly everywhere, even if you’re careful. Add them to water for a few minutes, though, and they become really soft and bouncy. Yes, bouncy, as in, if you drain off the water and toss them on the table, you’ll see them bounce. Go ahead, do it!

But that’s not relevant to the recipe, so moving on….
Put it all together and you get something like this: 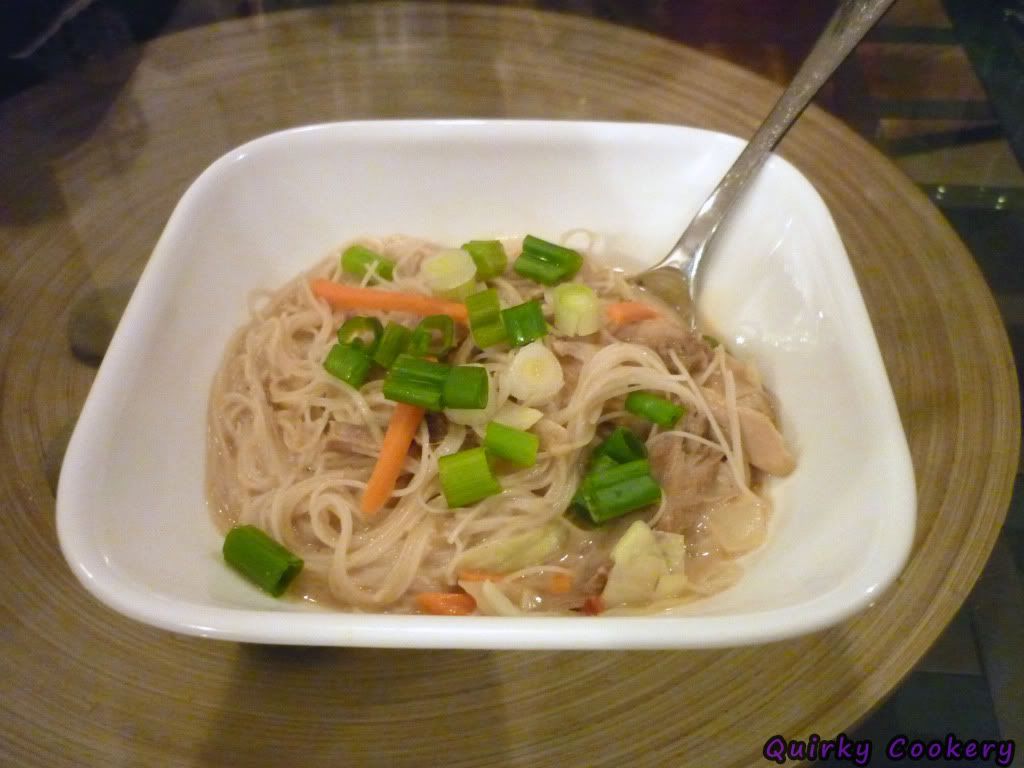 Alright, so really, it doesn’t *look* like the most appetizing dish. It’s this sickly gray color that even with some photo editing, doesn’t really look much better.

But it tastes good and that’s what really matters. Be happy I spared you the grosser series of prep pictures that were more like this picture. The shadows actually make it look better.

Ew! But it smelled delicious and I was starving so at that point, I obviously carried on. Tossing on more color really helped, so I’m happy I had green onions.

Overall impression? It was better than I expected. It was really easy and fast to make, which made it even better. A little lemon or lime juice could really go a long way in kicking it up a notch in the flavor department, too.

Oh, and I had never used coconut milk before because well, I really dislike coconut, remember? When the can was opened and the smell hit me, I started having even more doubts, but it added a creaminess that straight broth couldn’t…and it didn’t actually *taste* like coconut, so once the smell died down, I was happy with the results, hehe. I added more liquid to my bowl than what’s showing in the pictures and oh my god, I was so stuffed by the end. I had no idea it would be so filling.

For the original recipe, check out Lynn’s Kitchen Adventures. She has a version that doesn’t use the coconut milk, too, which looks more like this:

My version of the recipe ended up being for a smaller batch. Take note I didn’t just cut the original in half, and actually used almost the full amount of some of the ingredients anyway.

Remember to check out others at the Crazy Cooking Challenge.