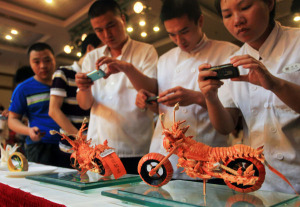 I really couldn’t find much about these lobster bikes, other than that the chef got the idea while tossing out shells used during a cooking class. Then again, what else would there be to know? It’s not like creating art like this needs to have a logical reason for it, right? :P

How to host an amazing crawfish/shrimp boil party

Circa 2009 again.
I had never even heard of a “shrimp boil,” much less been to one. I wasn’t even sure what to expect, but whatever…it was a party invitation with new friends of the family and really, when have I ever turned down the chance at food?
If you don’t know what it is either, it’s often times with crawfish (crayfish? crawdads? craw daddies?) and is mostly associated with Louisiana or at the very least, the coast. Wikipedia is happy to explain more:

A boil is usually done in a large pot (60 to 80 quarts) fitted with a strainer and heated by propane. However, some traditionalists see no need for a strainer and make use of a net or a wire mesh scoop. Seasonings include crab boil packets, cayenne pepper, hot sauce, salt, lemons, and bay leaf. Ears of corn, new potatoes, onions, and heads of garlic are usually included in shrimp and crawfish boils. Some people will add smoked sausage links and/or mushrooms. (….) The contents of the pot are removed, drained, and then dumped onto a newspaper covered table. (…) Bottles of hot sauce, lemons and melted butter are usually available

I didn’t know any of this beforehand, so it was quite new for me. Watching the guys rip open ‘alcoholic beverage’ boxes and bags for the serving platter and dumping food everywhere was….well….spectacular.
I know it’s silly, but I love that! Nothing fancy. Nothing scheduled or concrete or any special way that something has to be eaten. Just dig in!
We learned lots that night actually, and the pictures will teach you about a great party way better than I can with words, so enjoy:

(Oops, sorry it’s blurry…old camera)
Friends and family are key. I don’t remember how many people were there, but everyone acted like they knew each other, even though some of us were clueless. A great party should feel like you’re hanging out in your PJs with family, even when it happens to be coworkers, too.

Seats should be aplenty, but musical chair should be encouraged. Adults and kids alike were all over the place, running about or playing games, but there was always a seat ready to be taken when feet needed a break.

Oh, and on the left, there, that’s the Boil Master. He’s in charge of manning the pot, making sure the ingredients go in at the right time, and keeping anxious fingers at bay.

Potholders are key. The basket is hot and you don’t want to waste any time with burned fingers unless it’s from popping open shrimp!

It might look like there’s a helping hand involved there, but really, there’s just a line of people waiting to dig in and as soon as he backs up, they’ll crowd the table from all directions.

This is actually a picture from the second or third round, as evidenced by the carrots left behind from the previous go and a fresh batch going on top.

Blowing on it really isn’t going to help, but if you’re hungry and impatient, you can try, hehe.

Learning to peel your own shrimp can be hard…and gross even.

But the success is so worth it. Even the shrimp will be smiling by the end. :)

Ketchup, ranch dressing, squeezable butter and crackers should all be arranged on your best pink kids’ table. The crackers are perfect for the whole garlic clovers that will melt in your mouth or to pair with the butter while you’re chomping at the bit, waiting for the next round to come out.

Bags/corn hole can be a backyard blast, especially if you have little helpers in between. Horse-shoes could be fun, too, but watch out for little toes.

If accidents do happen, make sure you have a big sister around to comfort you. They’re the best.

They entertain for hours, encourage sharing and trading….

And really, even the big kids will love them. ;)

Just keep an eye out for runaway jeeps and princesses.

And at the end of the night, when bellies are full and everyone’s happy, there’s nothing better than impromptu music and curling up on mama’s lap. If you choose to do them at the same time, though, your mileage may vary…. ;)

Brought to you by a guest poster. Enjoy!

If the thought of eating yet another Big Mac bores you perhaps it’s time to take a trip to a few McDonald’s restaurants from around the world. You’ll be surprised at just how different the menus can be, but I’m sure you’ll still be lovin’ it! Essentially this is the oriental cousin of the much maligned Filet-O-Fish. But the Filet-O-Shrimp (or Shrimp Burger as it’s called in Japan) actually sounds pretty nice. It has the same structure as a Big Mac, but instead of a slab of meat it’s filled with a few whole breaded shrimp, lettuce and some spicy special sauce.

If the Shrimp Burger isn’t for you there are plenty of other novel items on the McMenu in Japan. How about some Ume Nuggets or some Shaka Shaka Chicken? Whatever you decide to eat you should wash it down with a green tea milkshake. They’re said to be delicious. If you’re settling down to a plate of McNuggets infused with spinach and parmesan cheese you can only be in Italy. They’re stuffed with the filling to make a kind of nugget ravioli. To eat them you’ll have to plan your Italian adventure carefully, as they only appear on the menu every now and then.

You might be interested to know that Italy resisted the influx of American fast food until 1983. Wendy’s was the first American chain to open in the country, and three years later a McDonald’s appeared in Rome which at that point was the largest in the world. It sounds like they were making up for lost time. This dish is unlike anything you’ll find in an American McDonald’s. Gallo Pinto is a traditional Costa Rican dish made from rice and black beans, and it is served with scrambled eggs and sour cream. Well it’s not always traditionally served with eggs and sour cream, but you can’t have a McDonald’s breakfast without some slightly dubious scrambled egg!

Another interesting menu item from Costa Rica is Fanta Kolita, which you can’t actually get in the United States. It tastes of bubble gum instead of orange, which sounds a bit crazy to me! The piece de resistance is without doubt the McLobster, which is seasonally available in the Maritime Provinces of Canada and has proved so popular that you can now get one in New England. Essentially it’s a lobster roll with a bit of lettuce thrown in. It sounds simple but there were even plans to introduce them across the whole of America at one point, so they must taste good.

Other items found on a Canadian McDonald’s menu include the Buttermilk Biscuit Sandwich (served at breakfast) and a double Filet-O-Fish. It seems that they love a bit of seafood in Canada!

Adam Daniels loves to write about quirky stuff. He works as a copywriter for Find Me A Gift, the online novelty gifts specialists from the United Kingdom