Dr. Seuss themed food – From here to there, funny things are everywhere

I can’t pinpoint a favorite book, much less a favorite character, but I definitely have a soft spot for Dr. Seuss books.

One Fish, Two Fish, Red Fish, Blue Fish – And a bunch of other Dr. Seuss theme foods for birthday party

Thing One and Thing Two Cupcakes

How the Grinch Stole Christmas Guacamole 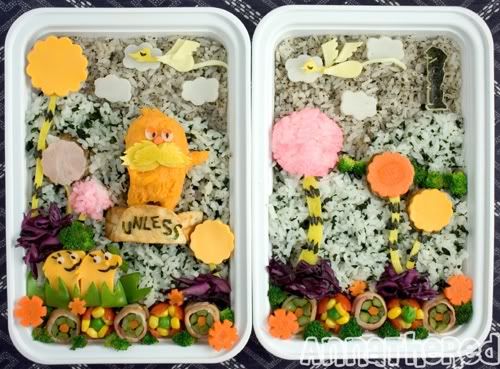 The Lorax Bento from Anna Red

Are You My Mother? bento

I don’t have original sources for these, but couldn’t resist posting them….especially the bottom right which features 3 Dr Seuss books in a muffin tin style lunch.

It’s the meat of kings!
It’s made from pig,
try it with onion rings!
Pork sure goes with everything,
’cause it’s made from swine,
that’s why it sure tastes fine!
Just bring some to the picnic baby,
you know you wanna stuff it in my hamper,
Put these puddings in some tupperware,
’cause I don’t want to be a porky chancer
Lets talk about pork… converse about meat,
Veggies need wedgies ‘cause we can’t be beat!
Ham and Bacon, you should taste them,
I know it so pricy, but it’s so appetizing!!!

Hold the milk, put back the sugar
They are powerless to console
We’ve gathered here to sprinkle ashes
From our late friend’s cereal bowl.
Breakfast Clubbers, say the motto
That he taught us to repeat:
"You will lose it in your gym class
If you wait ’til noon to eat."
Back when the Chess Club said our eggs were soft
Every Monday he’d say grace and hold our juice aloft
Oh, none of us knew his checkout time would come so soon
But before his brain stopped waving, he composed this tune:
[Chorus]
WHEN THE TOAST IS BURNED
AND ALL THE MILK HAS TURNED
AND CAPTAIN CRUNCH IS WAVING FAREWELL
WHEN THE BIG ONE FINDS YOU
MAY THIS SONG REMIND YOU
THAT THEY DON’T SERVE BREAKFAST IN HELL
Breakfast clubbers, drop the hankies.
Though to some our friend was odd,
That day he bought those pine pajamas
His check was good with God.
Those here without the Lord,
How do you cope?
For this morning we don’t mourn
Like those who have no hope
Oh, rise up, Fruit Loop lovers –
Sing out sweet & low
With spoons held high
We bid our brother, "Cheerio!"
[Chorus]

(And if you want to kill me for posting that last video, check out this link which is an awesome video of kids’ reactions to Nyan cat)