Quirky Food Blogs – There’s a niche for everything

It’s true. The internet is definitely my favorite place to be. :P

In case you haven’t seen these weirdo blogs before, you should hop through at least a few to see what other people do with their free time.

Bea Arthur Mountains Pizza – If you don’t it, don’t worry….it really is just Photoshopped pictures that include Bea Arthur, mountains, and uh, pizza….

Bread People – Lots of people with various breads for heads.

Album Tacos – Who doesn’t love tacos and music? Why not have them together then? And there’s tons of old albums, too, so if you don’t recognize newer ones, no worries, there’s something for everybody. If, you know, you’re into this kinda thing…

Lunchbag Art – Why should brown-bagging it be boring? Here’s an awesome dad who draws on lunch bags.

Originally, I was looking for a new way to use chickpeas. I love hummus and all, but something a bit more substantial would be nice, ya know? So when I ran across these, we thought they’d be worth a shot. They’re called burgers there, but tucked into a pita with a yogurt/tahini sauce and sprouts….which sounds a lot more like a larger, flattened falafel to me.

Anyway, it was worth a shot. We soaked and cooked the chickpeas (why use canned when the dry ones are so freakin’ cheap and easy to do yourself?). I had every intention of making some pitas….but then, well, didn’t. And for the same reason of time constraint, we couldn’t really throw together a loaf of bread either.

But corn tortillas I could do! Five minutes to mix and let set, and then another 2-3 per tortilla for frying? Easy peasy.

This one was caught bursting with smiles…or something cheesy like that:

Oh, and just so you know… If you try to rush to finish a sauce while you leave one in a pan too long, it burns. It’s still edible when it’s brown like this, but it smells exactly like burnt popcorn. Can’t imagine why… :P

Even though I didn’t have time to make pitas, I apparently had time to let my yogurt strain.

This is to let a lot of the liquid drain out, leaving you with a thick, creamy, almost greek yogurt texture to use for a sauce.

Put a layer of cheesecloth in a strainer and let it sit for a couple hours (or overnight in the fridge even if you want). Use plain yogurt, not vanilla, and if you’re one of those people who don’t like to use full fat, real yogurt, be prepared for a lot of liquid in your 2% milk versions:

^ That’s a ton of liquid in that bowl considering I was only straining a cup of yogurt.

The burgers were a cinch to throw together. All the ingredients got tossed into the food processor and because I apparently left the chickpeas too hot, the mixture was put in the fridge for a few minutes to harden up. It was just enough to form several little patties without them falling apart.

Made the sauce while the tortillas and burgers were frying, and it all came together nicely. 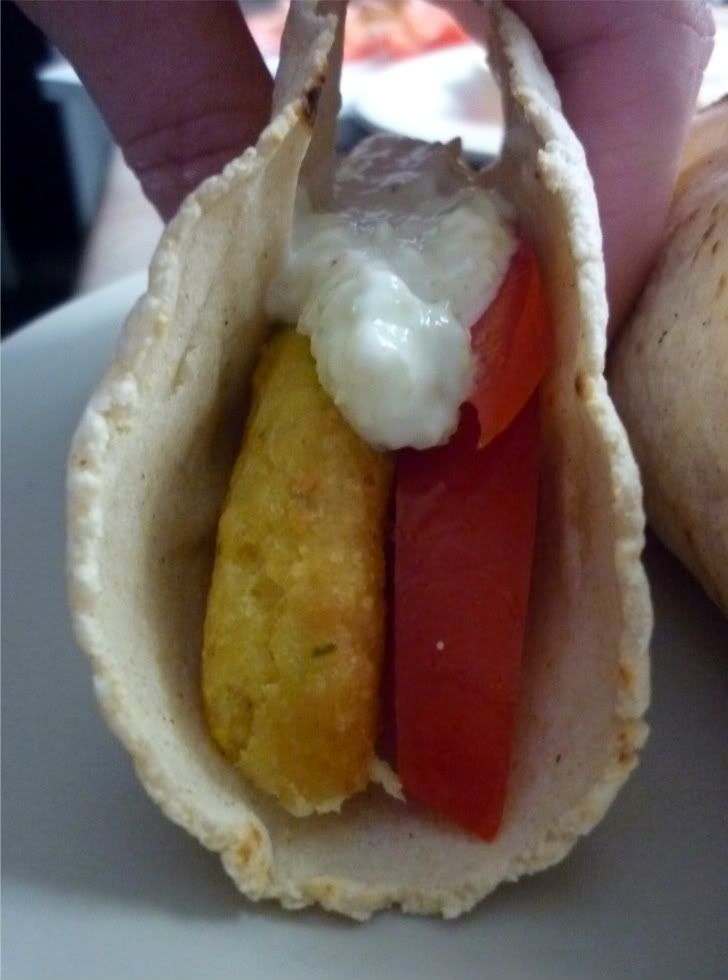 Eaten like this, they were definitely more like falafel taco combos, but were delicious beyond my expectations. The burgers were thin/thick enough to be soft on the inside but crispy on the outside. I could’ve gone for some lettuce or sprouts in them as well, but I had already devoured two wraps, plus some extra patties on the side before I thought to add anything else.

Wanna make your own? Here are the recipes for everything above:

Place everything but the oil into your food processor and pulse. You could also mash the chickpeas by hand with a fork, but it’ll take longer….then add your other ingredients. Expect a lumpier, coarser mix this way, but the idea is the same.

If using a food processor, stop a couple times to scrape down the sides and check to see if the mixture holds together. If it’s too wet, add a bit more flour. It should be moist, but it should hold shape, too, so if it’s falling apart from being too dry or wet, add ingredients accordingly. If the mixture feels excessively warm from handling, toss it in the fridge or freezer for a few minutes.

Heat oil over medium-high heat in your favorite pan. Form chickpea mixture into whatever size patties you prefer. Cook 2-3 minutes per side….or until they’re brown and to your desired crispiness…which is of course going to vary, depending on the size of your burgers/patties.

Tzatziki Sauce – Inspired by All Recipes

This isn’t authentic tzatziki, but I didn’t want the tahini sauce that the previous recipe suggested, so I combined a few tzatziki recipes for this.

Again, this was done in the food processor to make it fast. To cut down on liquid again, slice or shred your cucumber a bit in advance, lay out on a plate, and sprinkle with salt. When you’re almost ready to use it, rinse and squeeze it dry. It’ll retain a bit of the salt, so watch out when it comes to adjusting your recipe, but much of the moisture will be removed. Then pulse everything and refrigerate while you wait.

Corn tortillas – Inspired by the bag of masa :P

Combine and mix thoroughly for 2 minutes. if dough is dry, add more water (about a teaspoon at a time). They should hold their shape, but not stick to your hand. If you pinch off a piece and roll it into a small ball, press it flat between your thumb and finger….if the edges crack, add a little more water.

Divide into 8 equal balls. Cover with a damp cloth to keep them moist. Let set for a few minutes while you prepare your tortilla press.

Heat ungreased griddle skilled on med-high. Cook them one at a time for about a minute, then turn and cook for another minute. Depending on the heat of your skillet, you may find you need another minute per side. They’re done when they start showing slight brown marks like in the first picture of my cooked tortillas above. The second side may not brown the same because the edges sometimes start to curl and not all parts will touch the pan.

(The browned marks on this tortilla even lined up to be the perfect nose as I was putting my falafel tacos together, hehe)

Japanese bento boxes are measured in milliliters, so that 2.5 cups is a 600mL bento. The really cool part about portion control like this is that for authentic boxes, the capacity is supposed to also line up with about how many calories are in the box.

LIAB has some really awesome charts for how large bento boxes should be based on age or height. It also has various breakdowns of ratios of food groups to be in each box. So for example, the general rule is 3 parts grain, 2 parts vegetable, and occasionally things like meat, fish, dairy or fruits, but no candy, junk food, or fatty foods.

On some days, that 600mL of food seems like an absolute ton. Other days, I feel like I’m not sending enough food. It just depends on what I’m sending that day and just how crammed I make the boxes. I haven’t been following a set ratio, but tend to lean toward having a main grain dish, sometimes 2, a veggie portion, and fruit. They’re big fruit eaters and this meal is when they usually get their fix for that.

Most days tend to be completely different (read: completely random), even if I’m repeating various sides and using the same proportions

Here’s some of the boxes from the last few weeks: