Freezer beef stew in a bag

I love beef stew, but don’t always feel like making it from scratch. Actually, more often than not, beef stew ends up being the result of me making a roast with potatoes, and the following day, if there are any leftovers (there usually aren’t), then I’ll toss them in a pan, add some gravy and broth, and maybe toss in some frozen veggies.

For Christmas, though, I had a friend of the family on my gift list who always buys whatever he wants and would be upset if we bought him anything anyway. He’s not in the best of health, though, and one of the main reasons is that he doesn’t cook any more and has no one to cook for him, so he eats out. A lot.

When my mom saw him starting to make some efforts in the right direction, though, she had a brilliant idea and asked me to execute it. She wanted a freezer basket full of several homemade, slightly healthier versions of foods he already enjoys, that he could just heat up at home whenever.

“Beef stew in a bag” or “freezer beef stew” is something that I’d wanted to do for myself anyway and hadn’t gotten around to, so it was one of the first things I was sure to add to my list. 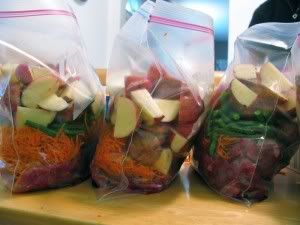 That’s the original picture I saw associated with the recipe on Once A Month Mom. It’s Real Mom Kithen’s post on her site that has the instructions and quantities, so after a bit of searching, I finally found it (yay for moving sites and redirecting….boo for all the links being broken, though).

Check out this link for the original. I didn’t follow it exactly, so here’s the best I can guess is my modified version below. I mostly just eyed it and tossed in more or less veggies, depending on what I had chopped and in front of me. This is definitely best done by chopping everything at once and then splitting amongst bags.

Freezer Beef Stew in a Bag

Layer all the meat and veggies into a gallon-size ziploc freezer bag. The prettier, the better, hehe. Squeeze out as much air as possible. Mix spices, broth, and paste into a bowl and taste test before dumping into the bag as well…adjust according to your tastes. Be sure to label your bags with the date and cooking instructions.

To serve, thaw in the fridge overnight and cook in a crockpot on low for 6-8 hours. You can also do it on the stove on low for about 35-40 minutes, according to Real Mom Kitchen. Just cook until the stew is thick and the veggies are cooked thoroughly. If you like your stew thicker, mix a bit of cornstarch and cold water together, then add to the pot and keep simmering.

I considered browning and seasoning the meat first or even including it in a small ziploc bag by itself, included within the large one, so that he (or I, when I pull out mine) could brown it in hot oil before it being tossed in with the rest of the stew. Ultimately, though, it was for convenience’s sake, so it all went into the bag and is ready to all be tossed in a crockpot all day as well. Easy peasy. Except without peas.