That looks pretty normal, right? I hope so because I really wanted to provide a “classic” picture for this dish considering it’s called “Classic Spaghetti Carbonara.”

Directions:
1.) In a large sauté pan over medium heat, cook the bacon until crispy, about 6 minutes. Remove the bacon and drain on paper towels.
2.) Pour off all the oil except for 3 tablespoons.
3.) Add the garlic. Season with black pepper. Sauté for 30 seconds.
4.) Add the crispy bacon and the pasta. Saute for 1 minute.
5.) Season the eggs with salt. Remove the pan from the heat and add the eggs, whisking quickly until the eggs thicken, but do not scramble.
6.) Add the cheese and re-season with salt and pepper.
7.) Mound into serving bowls and garnish with parsley.

I chose this recipe from the culinary school at Baltimore International College. There were so many recipes to choose from, but I opted for one that I’ve cooked before, so I had less chance of royally messing it up and I could feel more comfortable playing around with it if need be. There are a few more recipes I’m eyeing, so don’t be surprised if you see BIC here again.

Now for the quirky ones: 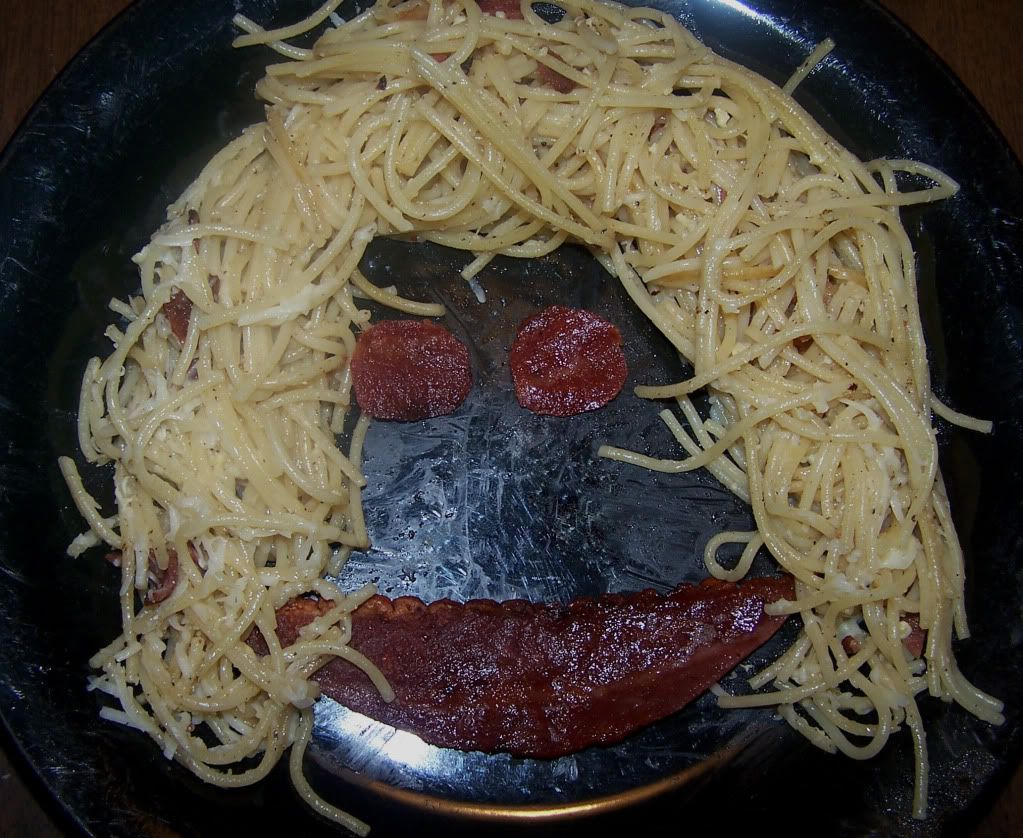 How was I supposed to know that I’d eventually start taking pictures of every dish I made and that black was a horrible color choice for that? Yay for pasta marks glaring, hehe.

When N came in  for supper, she yelled out “Yes! My second favorite!! It smells so good!” Um, I’ve only made carbonara one other time and it would’ve been over a year ago, lol. And now I’m wondering what her list of “current favorites” really includes. Hmm.

I liked this particular recipe, but I did get one criticism. “Isn’t it supposed to be creamier than this?” I agree that it wasn’t quite as creamy as other versions I’ve had. I’m wondering if part of that was because I used turkey bacon instead of regular pork bacon, which means there wasn’t nearly as much grease that would trickle into the pasta.

Oh, I also used more than the 1/2 pound bacon the recipe called for, too, just because it didn’t look like enough and I was feeding major bacon lovers, hehe.

Tip – Turkey bacon has a lot of obvious pluses and when cooked correctly to your particular tastes, it’s indistinguishable from pork bacon, especially when mixed into a dish like this. Because there’s not much fat, be mindful not to burn it unless that’s how you like it. My mom will only eat it burned, so I tend to burn some intentionally just for her, lol.


Tip – The biggest perk to turkey bacon is that it holds its shape. I was able to take normal kitchen shears to some strips to make the face pieces.


Tip – If you’ve never made carbonara before, I would suggest watching a video or at least researching for a few minutes online. You really, really don’t want the eggs to scramble, so be careful.


***I was provided with monetary compensation for the ingredients of this recipe. It also covered the cost of the salad I served with this but isn’t pictured because we added it after eating away part of the pasta faces. ;) Thanks BIC for turning me onto a list of great sounding recipes and giving me the opportunity to try one out and share with everybody. ***