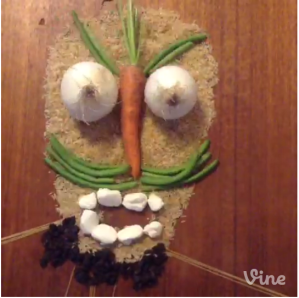 I tried to ignore Vine, minus a little jab at the app a few months ago. I think it’s a pretty silly concept, but hey, that’s the sort of thing that gets really popular on the internet, huh?

Some of these are kinda cool, though, so I’ll give them credit for being creative.

Sad tacos make me happy…and so do strange orange snacks

I had a hard time deciding whether I wanted to post “just a doodle” like the above one from someone’s nephew’s Paint doodling….

Or if I should go with some cheese doodle art like this life sized room….

So I went with all three. Now I want some fake processed air puffed cheese snacks. I doubt I’ll look half as cute eating them, though.

I make smiley faces  in my food all the time, but sometimes, they’re naturally occurring. Let’s give a round of applause for all the unaltered food (and cooking stuff!) faces out there.