In case you hadn’t noticed, I have this little thing for odd presentations. I like being able to eat out things that aren’t conventional dishes, too. I’m looking at you, avocados and watermelon bowls.

So obviously I want this, right? Not only does it sound delicious (hello chili mango sauce…how you doin’?), but it’s also in a fun, summery pineapple bowl. The only thing that might make it better is if it involved some awesome grill marks on the pineapple. Mmmmm.

Why is it that so many of the things This Is Why You’re Fat features are suddenly foods that I want to recreate? Gah!! The cheeseburger turtles with little hotdog feet and heads may be high in fat and calories, but they’re simply too adorable to pass up.

Pull string food chopper looks like a fun toy, but does it work?

cravings and curiosities, gadgets and gizmos, products | January 21, 2010 | By Jessi 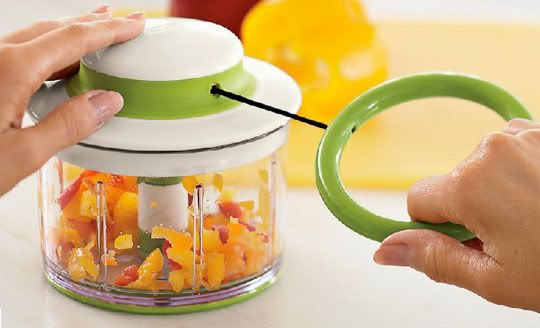 Reminiscent of those pull-string toys that start waddling, running, vibrating, etc whenever you pull on their string, this food chopper uses the same concept. Pull the string away and the blades spin to chop whatever amazing food you put inside.

This video shows how it works:

I was actually more impressed by it before I saw the video, sadly enough.

The idea is awesome, but having the blades that direction instead of chopping up and down like many choppers, made me a little unsure of how well it’d work. Well, not so much how “well” it’d work because it’s going to get the job done….eventually. It just sorta seemed like in the video that it was taking longer to chop the nuts than it might’ve in another chopper.

And with other choppers, when the blades start to dull a little bit, they still work just fine, but how well is this going to after a while when the blades don’t have a hard surface to hit against and just spin instead?

I ‘do’ love the pull string bit (notice how the ring folds onto the base perfectly?). It reminds me very much of toys like this:

But without trying it myself, I just don’t know how well it’d work. I suppose if I really wanted to get a workout in the kitchen, I’d probably get my right arm rather buff after chopping lots at once.