Halloween Birthday Party – The buildup, decorations, invitations, and everything else not related to food :P (Picture overload)

I have an October birthday and growing up, I always felt bad for other October babies who ended up with Halloween-themed parties. Fortunately, my parents always kept the seasons and holidays separated from birthdays, but I went to my fair share of kids’ parties who had orange and black cakes, ghost invitations, and Halloween candy treat bags.

But last year after the little one’s birthday party, she made an unusual request. Well, just having a request in general was unusual because we don’t take birthday theme/cake/party requests and they’re always surprises, but it was an even bigger shock to me that she commented she wanted a Halloween birthday party.

So knowing that 7 year olds make comments in passing all the time and then shortly forget, I held onto it. Fast forward 11 months later and I’d already been scheming things I wanted to do, and she was clueless. Couple this with my mom’s creativity as well and we were bound to rock this party.

This was for a little girl who is a huge girly girl one minute (she spends more time in the bathroom and in front of a mirror than all the other kids combined) and the next, she’s playing in the dirt and causing mischief. Mom didn’t want to do gorey stuff, so we went for a more traditional Halloween theme…..ghosts, witches, jack-o-lanterns, spiders, etc, but with a little bit of scariness and blood mixed in.

To kick things off, the invitations. Strangely, there were no Halloween invitations at any of the stores that really fit what we wanted, so we did what we do best, and improvised. 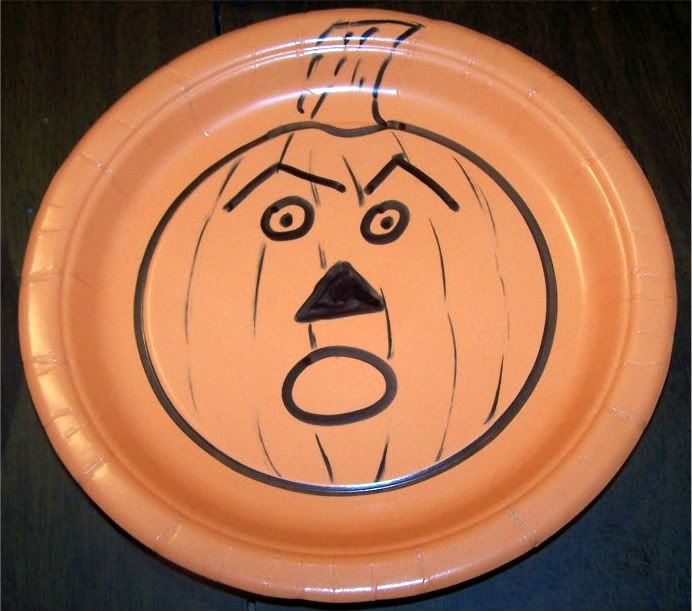 Of course, they just look like silly jack-o-lanterns, but what turns them into a birthday invitation is that all the details are on the back. Each of those were written slightly different, too, but they had all the important info clearly laid out.

My mom messed this pumpkin invitation up, but it turned out to be B’s favorite. It was referred to as the “Amish pumpkin” because she thought it looked like it had a beard like they often do, hehe.

These made B* curious about the party. “Am I having a Halloween party? My friends think it’s going to be a Halloween party. Are there going to be pumpkins at my party? Why do they look like pumpkins then?” We teased her about being crazy. “There’s no way we’d do a Halloween party! Stop asking about Halloween….it’s not for another 3 weeks, geesh.” She was skeptical, but still clueless until she and her friends got off the bus the day of her party and were greeted with a fully decorated family room and a blocked off dining room that was even more decorated.

The pictures are all taken in the light, but you can imagine it all in the dark, right? 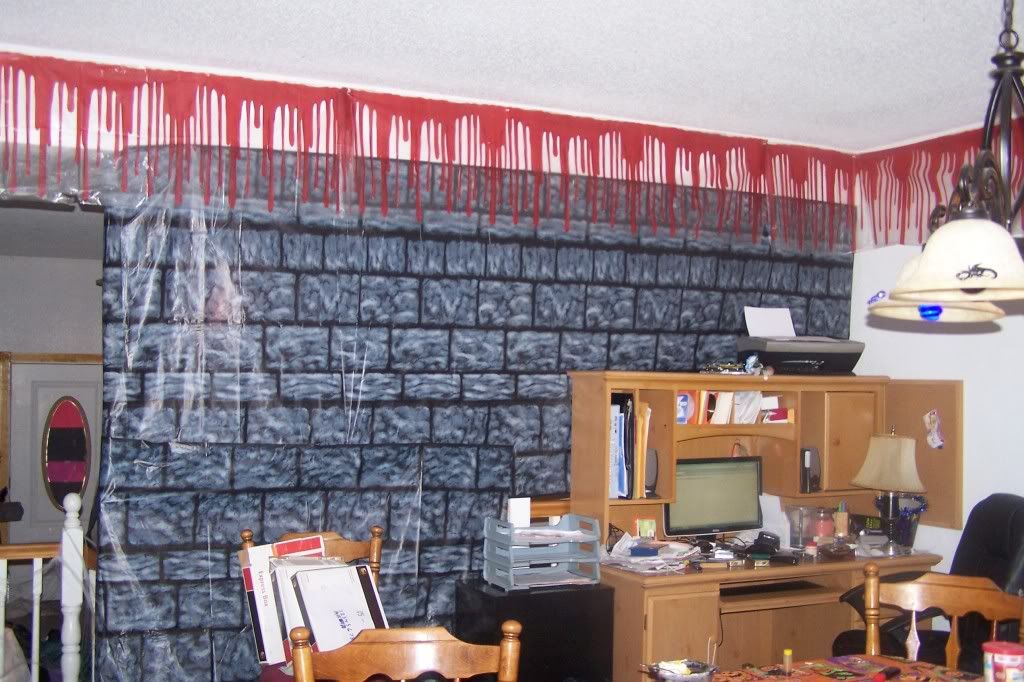 (I don’t seem to have a final picture of this, but all of the computer desk and such over there was covered in brick and spiderweb, too)

(Yes, that’s my kitty who decided to be part of the action….doesn’t it look like she’s under the moonlight?)

(Less thrilled about being photographed from this side)

Decorations are cool and all, but that meant all the kids looked out of place. My mom still has all the old costumes from the last many years, so it was nothing for us to have an entire huge tub full of costumes for all the kids to put on (over their own clothes). And both before and after the food/cake/presents portion of the party, they traded costumes, got into character, and had a blast playing dress-up.

Here’s a handful of censored group shots so you can get the idea without me showing you the dozens and dozens of cotume ideas they came up with. They had some spectacular combinations using costume pieces that were drastically different (like a devil out of pirate costumes or princess stuff turned into dead bride attire). 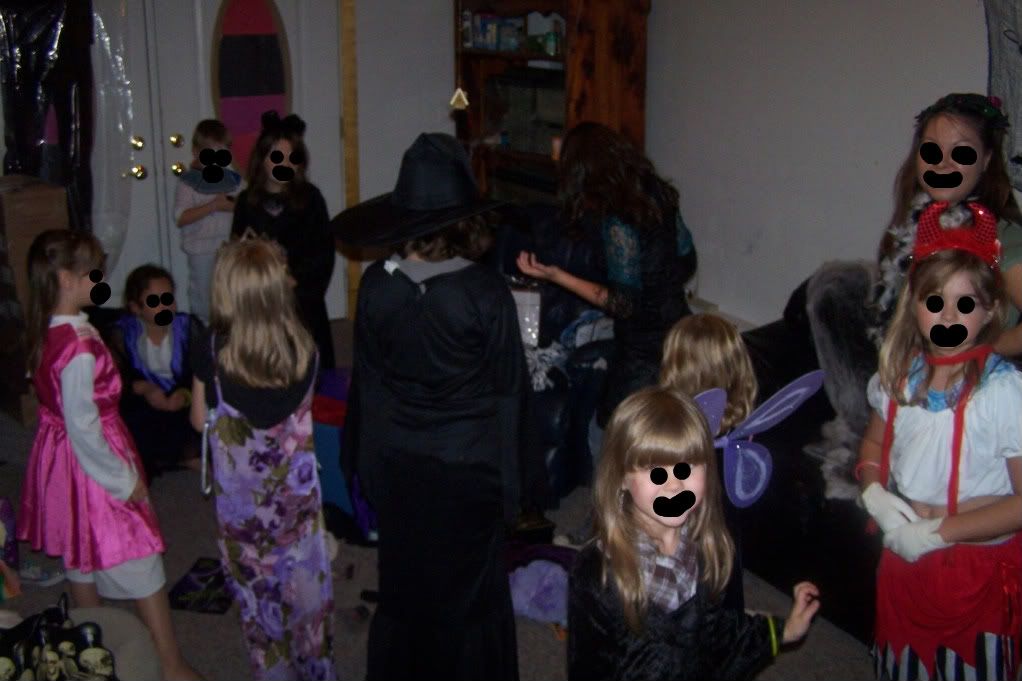 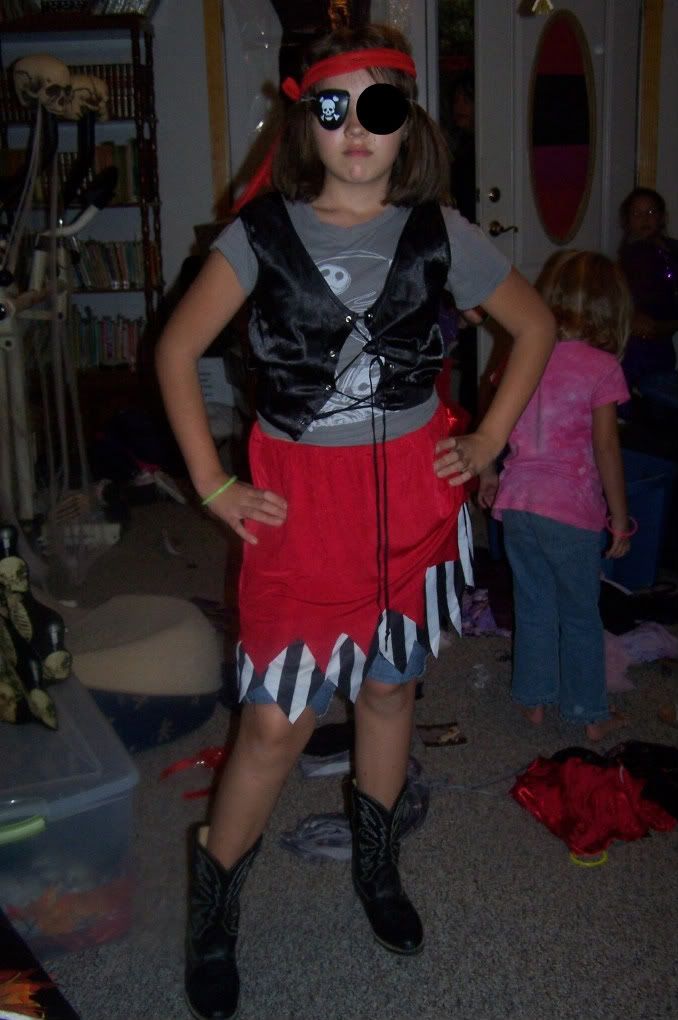 
Alright, I think that’s it for now. Onto the food next! The food is the most important, but you’d be surprised how much more enhanced it all is with a little attention to detail like decorations and fun, hehe.