This was not my own idea, so whose where did my inspiration come from?

I found it via “TheKitchn.” They found it from Woman’s Day article “10 Off-the-Wall Hot Dogs.” Woman’s Day got the picture from BoingBoing. BoingBoing got it from a tip from DrO who was pointing out some people on LiveJournal doing this.

Needless to say, I did some digging to find the most original source of it I can find from back in 2004, and it’s on a page with a language I can’t even read. Fortunately, they translated a portion for English readers.

The image that was used in all of these looks a bit different than mine. They used larger chunks and stuck more spaghetti into each one. Keep in mind that I was using leftover hot dog slices from muffins, though, and I wasn’t convinced that the dogs weren’t just going to split open and fall apart either, so I didn’t want to waste too much on my first attempt.

There’s also the above variation over there. This sparked two ideas with me.

Want to make your own? Here are some tips:

Tip: Break your spaghetti strands in half for easier-to-work with segments.

Tip: If you want to add more than one hot dog to a set of strands, stack the pieces and carefully slide the spaghetti through the whole stack. If you try to add a single piece at a time, you’ll struggle to get all the spaghetti strands to line up easily.

Tip: Make sure there’s plenty of water in your pan. You’ll want to have plenty of room for these to stack gently before they start cooking. Otherwise, you’ll have some sticking out of the water to begin with and unevenly cooked.

Tip: Don’t do this when you’re in a hurry. Set aside some time to play. It doesn’t take ‘too’ long to stab all the hot dog pieces, but it’s certainly not as quick as a plain pot of spaghetti. And hey, you need to have some time to play with your food. ;)

Tip: If you’re going to get side-tracked with taking pictures and braiding spaghetti “hair,” make sure the kids are able to eat while you play. Fortunately, I had already fed them when I detoured to play with this.

Sally-chick spaghetti head makes me think of the muppets for some reason. And given that Tuktuki, a muppet from the Bangladeshi version, is the only one we came up with, I’m thinking that the purple spaghetti idea is really going to play out well now, hehe. Add more spaghetti to each one, braid it down the sides, use a full hot dog for the body…..now what can I make a green dress out of? Hmm… 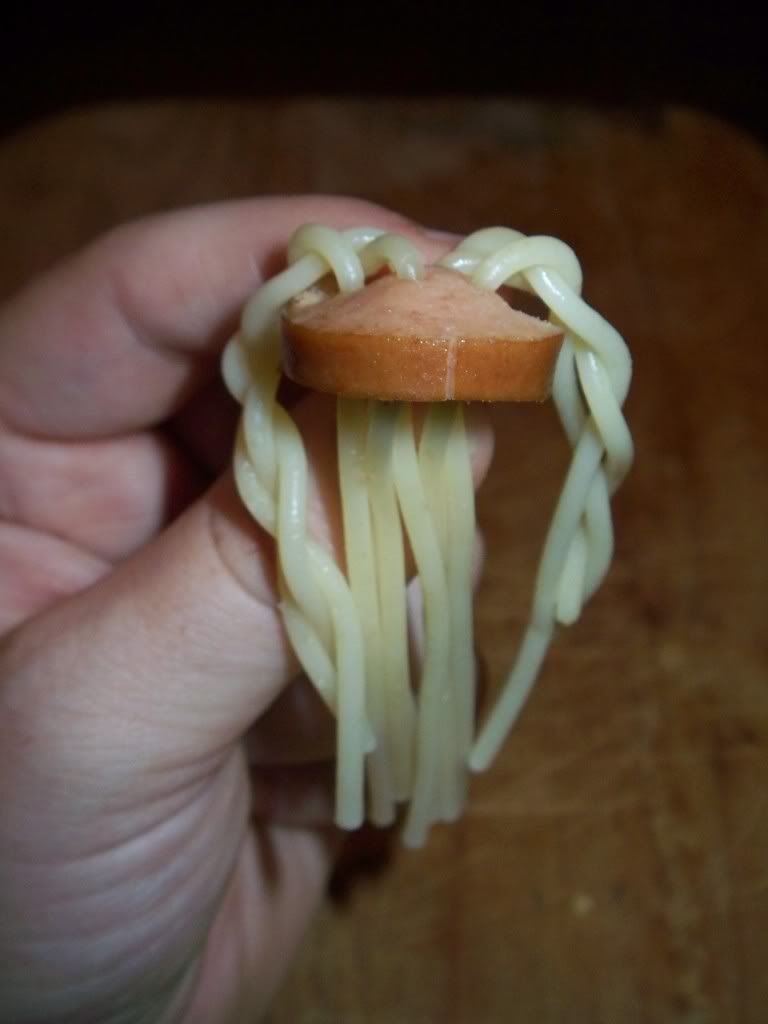 Click here to cancel reply.
« Crazy hot dogs and spaghetti dish – How it all went down
Learning with Chocolate Chips – The ABCs of Playing with Your Food »