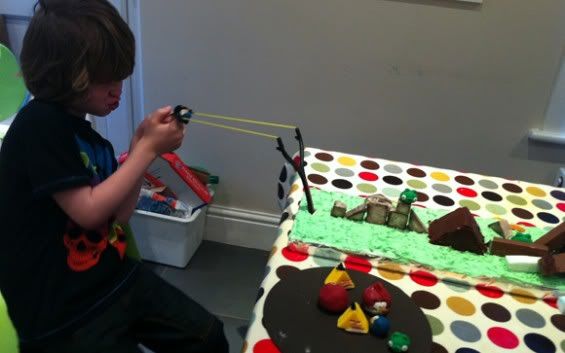 For you non-WoW players, the above shot has a big bad dude in the middle, and those colored things around him are examples of his oozes that come out and try to kill people.

Think…Bowser in the middle and those other things are the goombas and koopa troopas. Except bigger, badder, and you can’t just jump on them to get rid of ‘em. ;)

And for you WoW players, I’ll get straight to the pictures of the raid boss Yor’sahj’s oozes.

Yeah, it’s a crappy picture, but apparently people don’t take screenshots of the oozes very often, so I had a hard time finding decent ones.

And speaking of crappy pictures, I also had a hard time taking any of these pictures. Do you guys have any idea how much Jell-O moves!?! Of course it wiggles, but geez, it should stop some time. Add in a bobble head Clifford, and well, half of my pictures were blurry.

Proof of the wiggles:

So yeah, anyway, Clifford isn’t big enough to be the boss. Logically (because yes, we’re looking for logic in portraying virtual game items in the form of food….), it’d be a little closer to this:

The raiders would be Oscar The Grouch, Cookie Monster, and Clifford, and they’d be all like “pew, pew, pew!” on that red ooze until it was dead.

So uh, who wants to photoshop on some lasers or captions for our guild raid against Yors’ahj’s oozes?

Nevermind, a guildie did it within minutes. Thanks Kek!

Anywho, this is running long, so I’m going to tuck the “how-to” pictures here and you can click for the larger versions or some of the pictures that didn’t actually make it into the post.

It was very, very reminiscent of coloring eggs at Easter time. I measured out 1/4 of each box (21g) and worked it out to be 1/4 hot water, 1/4 ice cold water. My 4th black colored ooze came from mixing the leftovers of each of the others. The “molds” are actually egg poach pods. I sprayed them each with some cooking spray beforehand and after, gently peeled around all the edges until I could flip it over and pop them out.

You might also try muffin tins, little bowls/cups, etc. Whatever you do, make sure you set them in a larger bowl so they don’t get knocked over in the fridge.

Also, while it was really cool to play with them, all jiggly, wiggly, and gooey, they are *super* cold and they’re not exactly solid, so be careful. I had to use a spatula to move around the green one, as you can see in one of the first shots, and sprayed it with nonstick spray, too. It still didn’t keep it from oozing all over, though:

I had to re-form him on the pan every few seconds as he oozed all over. I briefly debated replacing him with a lime, considering how much easier that would’ve been. :P

I guess realistically (there we go again!), the green one falling apart really does look more like the slimes as they move across the Dragon Souls’ floor, though. Fortunately, the real thing tends to be a little cleaner than I was after, too.

Well, when people don’t stand in the bad. ;)