Cute as a bug BLT sandwich 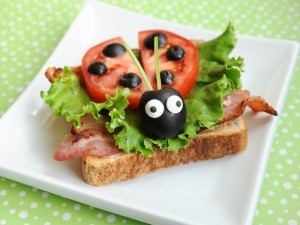 This is Jill’s creation and you can find the details of her open-faced ladybug BLT sandwich on Canadian Family.

The ladybug is certainly adorable and is easy to make. I immediately saved it away to share with you guys. Now that I’m posting about it, though, I can’t help but think….

But who eats a BLT as an open-faced sandwich?? Don’t get me wrong….I’d still eat the heck out of this and it doesn’t change its cuteness factor at all. But it seems like it’d be a pain to eat.

There’s no way a fork is going to easily tear through the chewy bacon or the leaf of lettuce on top. Adding another slice of bread would cover up the food art, but it’d make it more practical to eat.

Also, who eats olives on a BLT? I suppose Jill and her family does, but I’m betting those icing/candy eyes aren’t a normal topping for bacon, lettuce, and tomato, even in her family.

Unfortunately, the more I play with my own food, the more I hate when a food has to be changed right before eating in order to actually enjoy it, whether that’s eating the parts that don’t really mix well first (like the candy eyes on an olive) or pulling out toothpicks or having to take a knife to a sandwich that would otherwise be simple to eat in a different arrangement.

Then again, maybe I’m being a party pooper and should’ve just stuck with that “awww, isn’t it cute??” reaction I had first, hehe.

How to make ice cream roses

So ice cream roses are new to me. A quick Google search tells me that they’ve been around for a while, though, and a whole bunch of people make them.

I can’t say it’s something I could do at home very easily, but this guy seems to have the trick down pat. I’d likely just make a huge mess all over the place and would end up licking the counter off instead of even bothering with the cone.

Aren’t some of these awesome??

Canadians like their…. Slurpees – My first Slurpee Sphenopalatine Ganglioneuralgia

Sphenopalatine Ganglioneuralgia = The technical name for “brain freeze.”
I’ve always known what Slurpees were, but it wasn’t until last year that I had a real one. Where I grew up, 7/11s were nonexistent which is the only place that real Slurpees are sold. I had had Slush Puppies before, though, and assumed they were pretty much the same thing…just different brands.

As soon as I hit Vancouver, I was informed of how very wrong I was. They are NOT the same and Canadians hold a huge claim over their beloved Slurpees. Who knew?

So in order to fit in with “real Canadians,” more than one person insisted that I get a real Slurpee. I had to wait until the weather got warmer, but I finally did.

Machines with a dozen options of flavors are not really my friend considering that means I have to make decisions, so I waited patiently while my partner-in-crime chose multiple colors….and then I made sure I chose the exact opposite.
This meant that I ultimately got to try at least 8 different flavors and in varying combinations. I’m not big on sweet drinks, but I figured if I was going to try slurpees, I might as well try as many as possible, right?

For those Americans who find it weird for me to make a big deal about Canadian slurpees, there are two main reasons:
1. American Slurpees are different. Canadian slurpees are carbonated and American slurpees are injected with air instead, which means they have a different texture.
2. Canadians are obsessed with them, specifically those in Winnipeg. Winnepeggers hold the record sales for slurpees, which averages out to 188k drinks per month (yes, even across the cold ones), which is more than the Canadian average overall (179k per month).

And for the record, yes, I enjoyed my Slurpee. It was a warm Spring day and was nice to have a refreshing treat on my way home on the Skytrain. :)
... Older Posts