The best hot dogs put the toppings on first

This one is new to me entirely, but it does make sense.

If you’re the type who only adds a bit of ketchup or mustard or maybe the occasional scoop of relish, then this isn’t going to apply to you.

But if you’re the type who loves to pile on the toppings (Chicago hot dogs, anybody?), then you know all too well the pains of trying to keep all those toppings in place atop a slippery hot dog while you chow down.

So for the best hot dogs, what you’re actually supposed to do is start putting some of those toppings on first instead of on top. Don’t simply put on the ketchup and mustard because that will obviously make the bread soggy by the end of your dog. Instead, put the sturdier items on the very bottom like onions or pickles (or even lettuce, if that’s your style). Then pile on some of the other wetter ingredients.

Now if you’re at home, that’s pretty easy, but people shy away from doing that at a hot dog stand, right? So just ask the guy for your bun while they’re grilling the dog and you’ll cut your waiting time in half, too. Once you place the hot dog on top of all of the ingredients, it’ll somewhat squish into the middle and you’ll have the perfect hot dog before you know it.

Perfectly round Christmas cookies with a paper towel roll 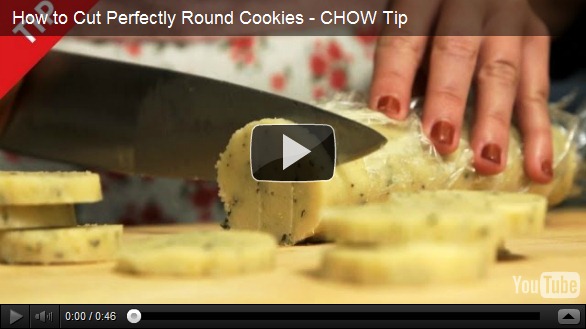 If you’re anything like me, you don’t really care what shape your cookies come out in….so long as they’re still edible.

Sometimes, they don’t even have to meet that requirement.

Fortunately, though, most people aren’t like me and some of you even sway toward the perfectionist side of the boat. If that’s you, you’ll love this tip.

If the dough is still a bit soft, rotate the cookie dough log a quarter turn between each slice as well. This will avoid the bottom of the roll flattening some and creating those horribly deformed cookies that you don’t want.

Or, don’t follow that advice and just send all of your rejected cookies to me instead. I will eliminate them in a very, er, humane way. All cookies will be harmed, but it’ll be what they truly wanted anyway, right? ;)

Limited counter space? Use an ironing board Are you doing a lot of baking this holiday season?

This is one of the best tips I have seen to extend your workspace without any money or hassle. Just use an ironing board. The great thing about them is that, unlike an extra table, an ironing board is already built for the heat. That not only frees up counter space, but it also frees up your pot holders.

You can put this in another room so your kitchen space isn’t blocked out more. Or, if you’re often cooking and without counter space, you could install an ironing board directly in your kitchen. I saw a few that did this on the inside of their pantry door. While they’re cooking, they leave the pantry open and flip open the ironing board to work on throughout the day. Then when the day is over, tip up the board, close the door, and your kitchen is back to its normal size again.

Here’s a video of someone talking about how she does it. She puts dish towels on hers to avoid the dirt and crumbs that might come from using it in the kitchen, too. It’s not like anyone ever really irons any more, though, right? But just in case, you don’t want any stray food left behind to get ironed directly onto your next piece of clothing that touches it.