Just watch. I find it hilarious that people actually write reviews like this, but even more so when they’re done as dramatic readings. Perfect. You can find more of them on the YouTube channel.

Oh, and as a side note, they actually did change their spoons after this review, so it’s good for something, too! 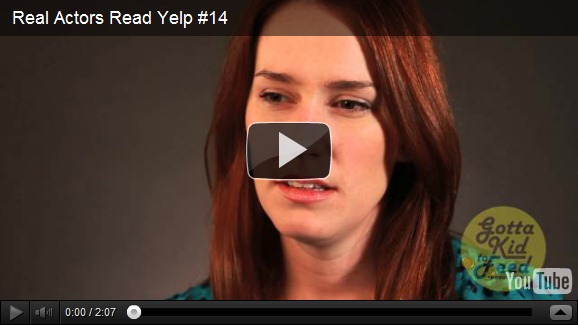 I don’t live in Troy. So I don’t need this place to succeed.

That being said, I think it’s nice that they provide a place in the area for people to hang out at night that isn’t a bar. Bravo.

But they have a big problem. A freakin’ huge problem. It’s their spoons. Hear me out. Never in my life have I encountered such an uncomfortable utensil. And it’s not that it’s hard to hold or that the seams poke into your fingers while you’re using it. The problem is… the shape of the bowl. Using it to put yogurt in my mouth actually hurts my lips. And I don’t know if the bowl is too deep or the rim is oddly curved…but every single bite…it…It pushes on my lips as I try in vain to enjoy the perfectly tart frozen yogurt with mango…blackberry…mandarin orange slices…

I’m not going back.

Do you know how many frozen yogurt places there are in this area? A sh*t ton. There is ZERO room for error.

I’m one of those weird people who actually sometimes craves tv dinners (They don’t even call them that any more, do they?). Are they better than a home cooked meal or a trip to a restaurant? Nah, not usually. But they’re cheap…and done in 3-5 minutes with minimal effort.

And I might have a little nostalgia in there somewhere, too. Growing up, I rarely got them and actually saw them as a treat. I was spoiled with home cooked meals and had no idea that I shouldn’t be jealous of my friends who always “got to go to McDonald’s” or “had cool Lunchables at lunchtime.” The grass is always greener, huh?

So while I rarely eat tv dinners or prepackaged meals of any sort, I certainly wasn’t going to turn down the chance to try out Lean Cuisine’s new line of dinners. I had already heard a bit of buzz about them and they were supposed to be pretty good, so why not, right?

I had a pretty hefty list to choose from, which is never easy for me, so I brought along a friend to help me choose and then sample them. Here were our choices:

Somehow, we managed to pick two chicken dishes that looked almost identical on the boxes, so I thought it’d be cool to compare/contrast and pick a winner between the two.

The contestants? Chile lime chicken for me and thai-style chicken for them. Actually, I don’t think they were intended to go in that order even, but it worked out for the best.

First, check out the pictures. I am SO sorry that the pictures aren’t great. Have you ever tried to take a picture of tv dinners? Even if they taste great, they don’t really look gourmet on a plate, huh? Only they can make them look good on the box, hehe. It didn’t help that I took the pictures after dark so I didn’t have the greatest lighting either. Oops.

That last picture is to show how that one sort of exploded in the microwave. It didn’t make a huge mess, but it did lose some of the sauce.

I attempted to plate the food so it’d look better, but that didn’t really work out. I added some leftover rice pilaf to the second plate because we were afraid it might not be enough food (these were for dinner instead of lunch).

So what did we think of the dishes?

My entrée-experiment-buddy was surprised they didn’t suck, so you know that gains a lot of points right there. Anyone who goes into an experiment with a negative mindset is going to require some extra convincing and proof to sway to the other side. With that alone, I think Lean Cuisine won overall, haha.

Overall, our winner is….

I would happily eat this again and I felt satisfied with my portion. I’m glad I was able to try more than one of them, too, although next time I should probably try one of the steak ones instead, just to mix it up and see what else they have.

I’m really glad that the two chicken ones were actually unique enough to stand on their own, too, because based on the pictures on the box and how they looked when I pulled them out, I thought for sure they would be way too similar or hard to tell apart.

Surely I’m not the only one that remembers some of those boxed meals year ago where they all sort of looked the same….and tasted the same….right?

I have partnered with Lean Cuisine through DailyBuzz Food to help promote their new line of Chef’s Pick products. I have been compensated for my time commitment to work with this product. However, my opinions are entirely my own and I have not been paid to publish positive comments. Thank you Lean Cuisine!